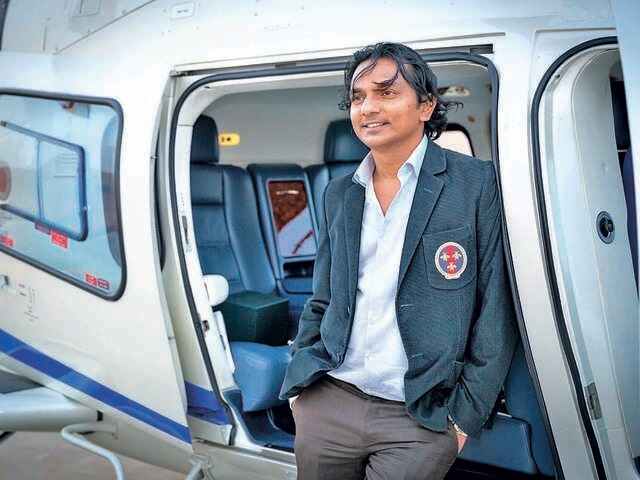 Description: Divyank is India’s richest start up founder with a net worth of Rs. 12,100 crore in 2019. Divyank Turakhia and his brother Bhavin runs a ad-tech firm Media.net, which was sold in $900 million to a Chinese company. Divyank Turakhia has Indian citizenship but now lives in Dubai.

Directi comprises of a group of tech businesses owned, operated or invested in by Bhavin and/or Divyank Turakhia. The Group boasts of multiple business units that are run independently by their respective management teams. Directi founder—brothers Bhavin, 38, and Divyank Turakhia, 36—beat all odds with their web-hosting and domain name registry business that they set up in 1998, when the internet was relatively new in India. The brothers were 16 and 14 then. And while building a company may have been a first for the duo, computer tech was not new to them. Their chartered accountant father bought them their first coding book when they were eight. They devoured programming books like candy since then.

Now, 21 years later, the brothers are winning for real. Divyank, referred to as Div, sold his six-year-old advertising technology firm Media.net to a consortium of Chinese ­investors in August for a whopping $900 million. The deal was negotiated by Bhavin in Beijing.

We continue with the #InsightsPodcast series, and on this edition we have with us Divyank Turakhia, Founder of Media.net, one of the largest online advertising businesses worldwide, which he bootstrapped till he eventually sold it in 2016 for $900 million.

Talking about dealing with failures, Divyank mentions how he keeps working on the problem until he’s solved it. That said, he urges entrepreneurs to reprioritise when needed. “Whenever you come across something that is more meaningful and that deserves your time and the time of your team a lot more because it’s a larger opportunity, you need to have that nimbleness and you need to be okay to let go off certain things that you’ve been working on.

Directi became the fastest growing domain registrar in Asia three years after it was started, they claim, and one of the fastest growing in the world at the time. It closed its first fiscal (FY1999) with $5,000 in revenues. The first million was made within five years of operations—in FY03, it posted $2 million in revenues. It rose 5x to $10 million in the next two years.

At the age of 13, when Divyank had a computer project at school, he and Bhavin, who was 15, spent an entire year developing a business-simulation game. It starts with an animation sequence on how a commercial partner has cheated the player and taken over a company. So, with no money in hand, the player is charged with building a rival business from scratch. The ultimate aim is to gain 100 percent market share. The player must handle money and employees as well as create and manage budgets. “Playing the game was educational. Creating it was an experience,” says Divyank.

Advertising technology startup Media.net, founded by tech entrepreneur Divyank Turakhia, said on Monday it had been acquired for about $900 million by a group of Chinese investors.

The deal would represent the third-largest in the ad tech industry, after Alphabet Inc unit Google’s acquisition of DoubleClick and Microsoft Corp’s deal for aQuantive.

“We got an incredible amount of interest just because ad tech is a large and growing space and, at the same time, the number of companies that have been successful in it have been limited,” Turakhia said in an interview.

The company’s products, which are licensed by various publishers and ad networks, auto-learn and display the most relevant ads to users.

Media.net, a Yahoo Inc ad partner, attracted seven bidders, including a publicly listed company based in the United States.

However, the bid fell through following a substantial decrease in the company’s stock value, Turakhia said.

The deal gives Media.net access to the Chinese online advertising market, which is currently the second largest in the world, Turakhia said.

Digital ad spend in China is expected to reach $40.42 billion in 2016, a 30 percent jump from a year earlier, according to research firm eMarketer.

Media.net, which is based in Dubai and New York, gets 90 percent of its revenue from the United States.

The company posted revenue of $232 million in 2015, with more than half of that coming from mobile users.

The Chinese consortium will buy Media.net from Turakhia’s Starbuster TMT Investments and has already made a payment of $426 million.